Helianthus – flower of the sun 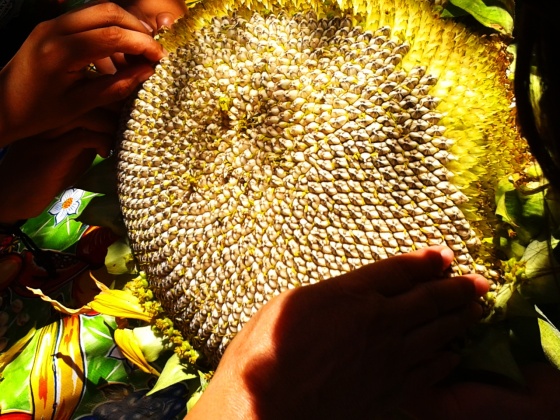 Sunflowers have been cultivated for many years in the Southwest. It is estimated they were domesticated around 5,000 years ago in North America. Traditionally, seeds were used to grind into meal, which was baked, or added to stews. The oil is also a valuable product, used for cooking or for hair. Once boiled, it can be skimmed off the surface of the water. Sunflower oil maintains it’s liquid form at lower temperatures than other animal fats.

Once, Peter the Great traveled to Holland, and found the sunflowers there to be fabulous. He brought them to Russian. During Advent and Lent in the 18th century, cooking oil was banned in the Russian Orthodox church. Sunflower oil was not, leading to development of the RUSSIAN MAMMOTH SUNFLOWER, which is what many people grow today. This is our Russian Mammoth in early June, towering above everything. 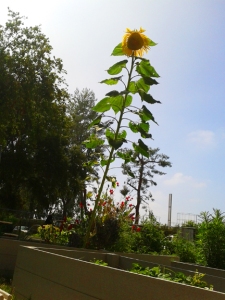 This was the first sunflower of the season. At the end of June, creatures were are beginning to feast on the seeds. Normally you should wait to harvest the seeds until the head is dry, and the seeds fall out easily. However, that’s if you do any proper job with your creature control. For the rest of our sunflowers, we’ll employ the paper bag trick, letting the seeds fully ripen and dry on the seed head before cutting them down. We decided to take this guy down anyways, as the seeds were almost ready.

Many hands helping pull the seeds out of the seed head. All the tiny flowers should have fallen off the seeds if it is properly ripened. We had to brush some off ourselves. 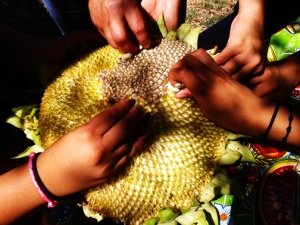 They should be dried. Then, you can roast them if you wish. First, soak overnight in a salt-water solution. Then drain, and roast until crisp. They have tons of healthy fats, protein, fiber, minerals, and vitamin E. Interestingly enough, a recent study done by the Institute of Food Research has found an emulsifier in the sunflower seed that could possibly replace casein (a dairy based protein that binds water and oil molecules together). There are many allergies associated with conventional casein.

Our harvest from part of one head 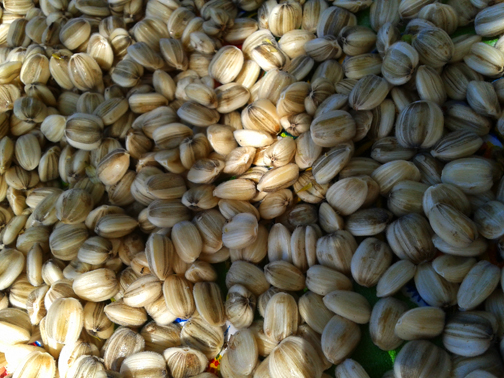 There are a number of kinds to chose from

– The Russian Mammoth (pictured above)

– Hopi black dye (seeds are all black, and were used to make a purple dye for textiles and baskets)

– Havuspai (amazing variety grown by farmers near the Grand Canyon, which unique by having genetic resistance to a particular variety of rust, which has devastated sunflower fields around the world, particularly Australia).

For your delight,  the tallest recorded sunflower was grown1986 by M. Heijms of Oirschot, Netherlands. His sunflower plant reached the amazing height of 25-feet 5 1/2-inches (7.76 m) tall.