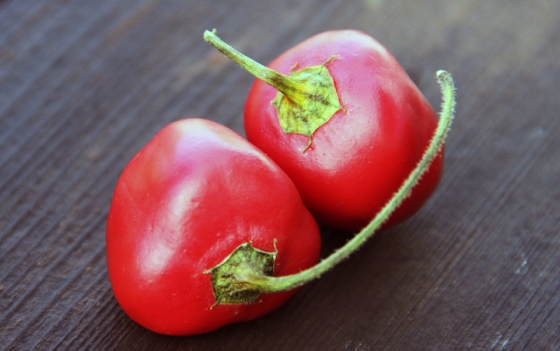 This is Capsicum pubescens, a rare chili pepper in North America. Commonly known as Rocoto, Rukutu, Ruqutu, Luqutu, or Locoto chilies, these plants are indigenous to Central and South America. Unlike most other types of Capsicum plants, these chilis are not harmed by colder temperatures. They are native to higher elevations in Mexico and the Andes, and do not survive in the lower-tropical areas. They are long-lived perennials, and can grow to be 12 feet tall woody plants. Though most sources says this pepper is considered “very hot”,  the peppers I tried were not particularly spicy at all.  They are classified as having a heat factor of 50,00-200,000 on the Scoville index. They have unique black seeds (see below), and a flesh that is incredibly meaty and dense. 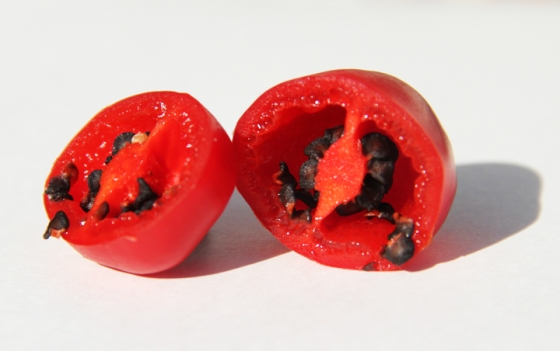 The chili pepper is another example of a plant that has radically adapted to the characteristics of its environment in order to survive. The adrenaline-inducing, tingly tongued enjoyment that we get from enjoying spicy food is not something that peppers evolved just for us.

In desert ecosystems, where the spiciest chiles originate, the chili plants grow particularly well under a certain variety of shrub; desert hackberry. The desert hackberry provides shelter from scorching sun and harsh wind. The majority of chili plants found in the wild are found under this particular plant. Interestingly enough, birds are not affected by the capsaicin found in hot chilies. Many indigenous people have a direct association with birds as chiles. As noted by Gary Paul Nabhan, “The Huastac Mayas refer to wild chile fruit as taa’ ts’itsin its, “the chile excreted by birds”, and the Chontal Mayan nickname for wild amashito chili means much the same; aj tso yup, “Mr. Shit-out Fruit”.

Birds do not damage the chili seeds in their digestive tract. In contrast, mammals who digest chiles generally pass seeds that cannot germinate, as well as dispersing the seeds too far away from their ideal growing habitat. Therefore, only the creatures that damage chili seeds (mammalian creatures and humans), are discouraged from eating chilies in the wild. The birds that are particularly fond of chili consumption are those that most commonly find habitat in the hackberry trees (the desert shrub that provides optimal growing conditions for the chilis).