While it is unbelievably amazing (and very hard) to work every on a beautiful CA farm everyday, sometimes you come into work to find this on the task board. 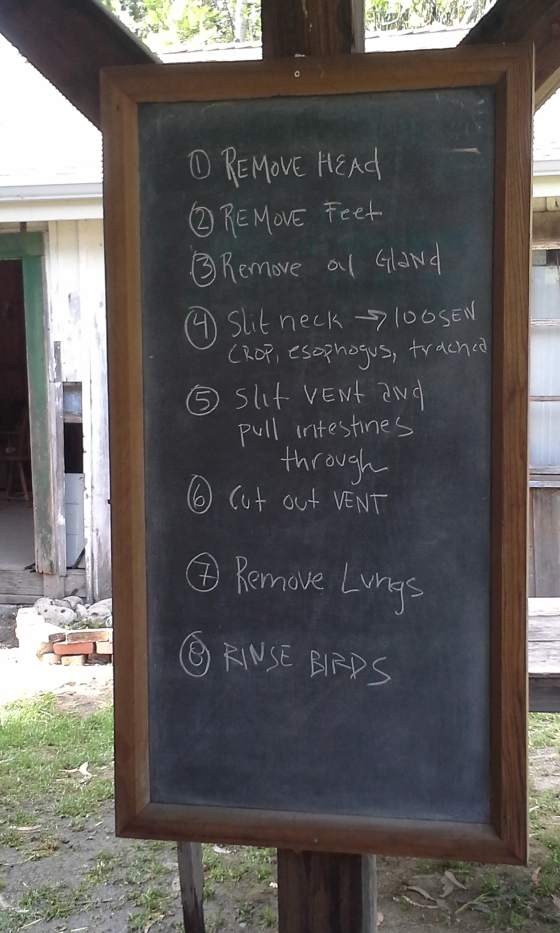 As a virtual pescatarian for years, I have never slaughtered anything, let alone even bought or prepared a cut of meat in the kitchen for years. Though I have never really eaten or liked pork or beef, I’ve chosen to be a mostly vegetarian for many reasons; health, financial, environmental, and social reasons, but mostly the huge resource requirement needed to raise domestic animals. Beef especially has a huge resource requirement, especially in water. You may know that it takes at least 600 gallons of water to produce just a 4 ounce hamburger. On the other hand, the water footprint of 1 pound of beans is 43 gallons of water. 1 pound of beans can feed a lot of people in our dry dry state.

Today we slaughtered, eviscerated, and cleaned about a dozen and half naked neck chickens (a particular breed). With bare necks, they are slightly easier to kill.

They were caught and caged yesterday morning so that their stomaches and intestines would be cleaner for the slaughter. First, the chickens were placed upside down in a killing cone, so that they would be calmer. Then, with a very sharp knife, the chicken throat is slit on either side of the windpipe just above the ears, and they are allowed to bleed out. If the cuts are done well, the slits should quickly let out a lot of blood. The chickens are “scalded”, dunked in hot water (150F) to loosen their feathers. After being plucked, the chickens are ready for evisceration, the removing of the organs and other innards.

First, we removed the heads, and the feet. Then, we remove the oil gland at the back of the chicken. Normally, chickens shake their butts to release oil from this gland to make their feathers more water resistant. Then we slit the necks, pulled out the crop, trachea, and esophagus. As a descendant from dinosaurs, chickens and their progenitors have evolved as survivors over thousands of years. The crop allows the chickens to take in food without chewing, which is stored in the crop. This allows them to move to a safe place while chewing and digesting their food, rather than being in open space vulnerable to predators. We then removed the major organs together, being careful not to puncture organs such as the gallbladder and intestines, which can contaminate the meat. It was surprising to find fully developed eggs in the oviducts of the chickens. Apparently in New York (of course), quiche are made with the newly developed eggs found in slaughtered chickens, and sold at excessively high prices as a delicacy.

Part of what made this morning especially intense what that the slaughter was done with a group of high school students.

As an educational farm, Pie Ranch believes that folks really and truly should be connected to the source of their food, especially those that eat meat…and really makes that happen. No joke. While some students did choose to help cook lunch instead, I was pretty surprised that many students were interested in the slaughter, and readily volunteered to help kill and eviscerate the birds. Only one student had slaughtered a chicken before, with his family back in the Philippines. It was really interesting to see the level of engagement and fascination from the students, who were truly interested in creating a respectful, humane, and safe slaughtering environment. I  very much appreciated the tone of reverence and respect that was facilitated by the staff at the farm.

While I did not do any of the initial killing, I did help with the evisceration, cleaning, and packing process. There is definitely a weird, disconcerting space in between seeing a living, breathing, chicken go to being vaccuum packed in a freezer bag in a number of minutes. After seeing how the whole process is done, I surprisingly felt a little more comfortable around the slaughter, even though it was still very emotionally intense. While I don’t see myself having large amounts of chickens at any point, I do believe all meat-eaters should know how and be able to slaughter, eviscerate, and clean their own animals. I do think it is important to know how to properly kill a chicken if you keep chickens just for eggs as well…and it does feel surprisingly empowering to have that knowledge and experience.